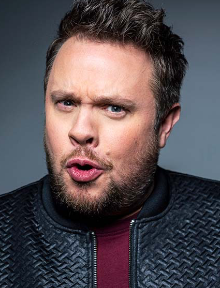 The co-host of the NBC and USA Network’s "Cannonball," LA-based comedian Simon Gibson exploded onto the comedy scene after a stand-out performance at the 2018 Just For Laughs New Faces showcase in Montreal, touring cities across the country and recently appeared in the Netflix series "Brews Brothers." He can currently be seen as one of the leads of the Amazon series "Inside Jokes," chronicling his journey from backyard open-mic comic to the mecca of comedy at JFL Montreal and center stage for the New Faces showcase. He recently appeared as host for the Kaaboo music/comedy festival as well as NBC’s “Last Call with Carson Daly.” Originally from Portland, Oregon, Simon brings a dynamic combination of high-energy physicality and in-your-face laughs to both stage and screen.

Simon Gibson came out of the womb kicking and screaming on May 30th, 1984 in Portland, Oregon and hasn’t stopped since.

A crowd favorite for his high-energy, hyper-aware style, Simon has performed at The Bridgetown Comedy Festival, Riot L.A, was part of the New Faces at Just For For Laughs Montreal, and has recently appeared on NBC’s “Last Call w/Carson Daly” as well as an upcoming Amazon docu-series called “Inside Jokes” coming out 11/30/2018.

Follow him on all the social medias and make sure to catch him at his next Live performance when he barrel-rolls into your town!