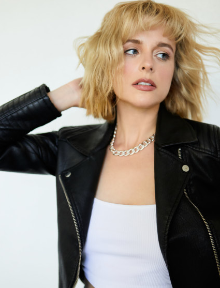 Erica starred in the ABC Digital series "The Off-Season," was a semi-regular performer and writer on NPR’s "A Prairie Home Companion," and a recurring character on the Audible series, "Dr. Katz: The Audiobook." Her first album, "Sad Lemon" hit #1 on the iTunes Comedy Charts and her first one-hour comedy special, "La Vie en Rhodes" was shot as part of the Tribeca Drive-In Fest and can be viewed on Amazon Prime. Erica currently voices the scene-stealing character of 'Dotty' in the hit Netflix animated series, "A Tale Dark and Grimm." "Bring the Funny " judge Jeff Foxworthy described Erica as 'the best-defined comic voice of the competition.'

Erica Rhodes is a regular panelist on Comedy Central’s @midnight and Fox’s Punchline. She has made appearances on SeeSo’s The Guest List, Hulu’s Coming to the Stage, AXS’ Live at Gotham and the syndicated Comics Unleashed. Erica has performed at San Francisco Sketchfest, the Moontower Comedy Festival (Austin, TX), the Blue Whale Comedy Festival (Tulsa, OK), the Boston Comedy Festival and RIOT LA Fest. Recent TV credits include ABC’s Modern Family, HBO’s Veep, Fox’s New Girl, and IFC’s Comedy Bang Bang. Erica stars in Audible’s Dr. Katz: The Audio Files and ABC Digital’s The Off Season. She recurs on TruTV’s Fameless and has been a semi-regular performer/writer on NPR’s A Prairie Home Companion.